According to TweakTown, “The 900P remains our lab champion on our Z270 test platform. The 905P is right there though, only one point behind the 900P in responsiveness scoring.” 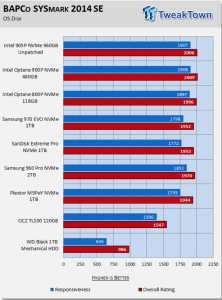 Also, “SYSmark 2014 SE is considered the gold standard for testing system performance because it is an application based benchmark. This test gives us the ultimate in real-world results because it utilizes actual applications running on the system, instead of playing back recorded traces. If you want to know what kind of impact a particular SSD will have on your system’s overall performance; this test will show you.”