According to AnandTech, “As expected, the hexa-core Core i7-8700 equipped machine has no trouble emerging on top in almost all scenarios, despite the impacts of the Spectre and Meltdown fixes that don’t impair some of the other machines. It comes a close second in the responsiveness scenario, only just beten by a configuration with an arguably better SSD and without the Meltdown / Spectre patches.” 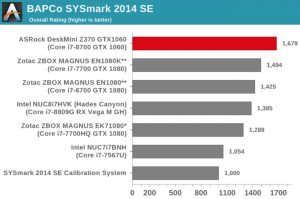 Head on over to AnandTech for the full “ASRock DeskMini Z370 GTX1060 Review: A Compact Coffee Lake Gaming PC” here.

Grab a copy of BAPCo’s SYSmark 2014 SE benchmark that includes the “Responsiveness” scenario and Energy Consumption feature up at the BAPCo Store here.