According to Surface Pro Artist, “While in S Mode, I ran the only benchmark available in Windows Store, TabletMark 2017 from BAPCo. Predictably, the Go scored neared the bottom of the devices I tested, but I was surprised to find it just behind my beloved m3 Surface Pro 4 which has never let me down over several years of nearly daily use.” 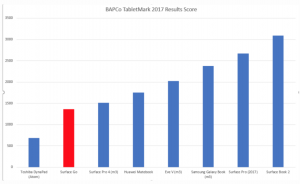 Head on over to Surface Pro Artist for the full “Surface Pen performance nearly stops the Go” Review here.

Grab a copy of BAPCo’s TabletMark 2017 benchmark here. With TabletMark 2017, you can compare the performance and battery life of devices based on all of the popular mobile platforms.